It was created by Guido van Rossum during 1985- 1990. Like Perl, Python source code is also available under the GNU General Public License (GPL). This tutorial gives enough understanding on Python programming language.

Who This Python 3 Tutorial Course Is Meant For

This tutorial is designed for software programmers who need to learn Python programming language from scratch. It is also meant for anyone who wants to start venturing into the world of Programming

You should have a basic understanding of Computer Programming terminologies.

You should have a PC with Python 3 installed in it to help you run and test the codes. If you you have an Android phone, QPython3 (Download it from Google App Store) would help you run the codes.

For examples in this tutorial there would be a link to provided to execute the sample in your browser with repl.it 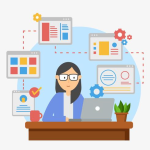 How To Make Money With Amazon Affiliate Program

How To Make Money With Domain Names